If you don’t treat a colony that is infested with Varroa mites effectively, you are condemning it to certain death, within a year in many cases.
These mites weaken the bees by feeding off their haemolymph (blood). Bees become far less resistant to other diseases, their lifetime is greatly shortened and their wings become atrophied. Fewer forager bees can fly to find pollen and nectar to feed larvae in the brood, and weakened, their return flight to the hive becomes more and more difficult. The colony produces less and less honey and becomes unable to feed the new bees, which causes the weakness (in spite of the laying activity of the queen) then the colony collapses.
Moreover, it has been proven that the higher the rate of infestation, the shorter the duration of life of honey bees. That is a real issue for wintering bees that are infested during their development and not able to go through winter and take part in colony development in spring.
Treating against Varroa mites is a matter of bees and colony survival. The goal is to lower the infestation rate to a threshold that can be sustainable for colony development and survival in winter.

Varroa destructor is a real plague for the honey bees and beekeepers in a majority of countries all over the world. Its control is a matter of global concern of the worldwide beekeeping industry.

Apivar strips are made of two components:

Amitraz is an acaricide. It does not kill mites directly, but is rather considered as a sub-lethal miticide with an original mode of action from neurotoxicity type, different from other current Varroacides. Acting on the synaptic transmission of mites, it leads to constant excitation and paralysis, followed by mite drop from the bee’s back. Secondarily, Varroa dies due to starvation as a result of this paralysis. Amitraz acts by contact only.

A plastic polymer specially chosen for its rigidity and to allow a slow and continuous release of amitraz during many weeks.
Apivar strip has been designed to release the active ingredient, from the opening of the pack, as soon as it is put into the hive. Amitraz is available on the surface of the strips for the bees that come in contact. The active ingredient is spread into the colony from one bee to another by contact. After a short period of time, amitraz is hydrolyzed and disappears from the hive.
Mode of action into the hive 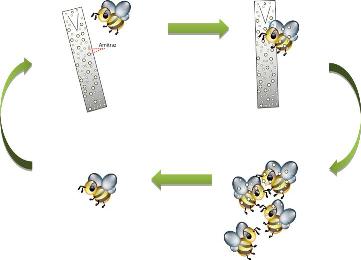 Legend:
1. Amitraz is available at the surface of the strip in the hive
2. Honey bees in contact with the strips pick up the active ingredient (no diffusion into the hive by evaporation)
3. By contact, honey bees can transfer the amitraz within the colony
4. Amitraz is quickly hydrolyzed and disappears from the hive. (cf FAQ residues)

Spread of amitraz into the colony is the result of the contact between the honey bees and the strips. As a consequence, this diffusion is not directly linked to the external temperature. This mode of action is different from other devices used to treat against Varroa such as thymol-based products whose diffusion by vaporization changes in relation to the hive’s atmosphere. This diffusion is blocked at a low temperature or dangerously increased at a very high temperature.

Regarding amitraz, temperature has no effect on the product itself. Nevertheless, we can consider that at low temperature, activity of bees is lowered and contacts with the strips can decrease.

In the apiary: If the situation requires a treatment, strips can be put into the hive as soon as hives become active after the winter or just after the honey collection and withdrawal of supers during summer.

You may use the product all year round, but as an additional safety factor for the good image of honey, it is recommended to not use Apivar when the honey supers are present:

Treatment after the last usable honey flow – Autumn Treatment.
The aim of the autumn treatment is to decontaminate the colony before winter bees are produced and is considered the most important treatment in most beekeeping systems to prepare the colony for a good wintering, in addition with correct feeding when needed.
It should be initiated as soon as honey supers are removed

In the apiary: Put the strips into the hive just after the honey supers are removed.

Spring Treatment
The aim of the spring treatment, with the removal of the strips before adding the honey supers, is to decrease the mite populations before honey collection and to be sure that there will be no risk of colony collapse during the season up to the Autumn treatment and to maximise honey yield.
Varroa mites can be most quickly and easily eliminated when the least amount of brood is present. 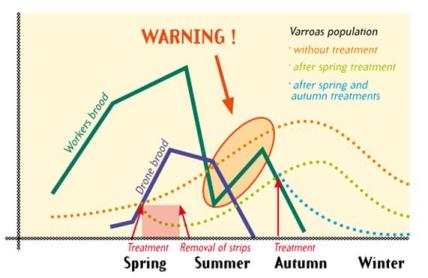 The recommended dosage is 2 strips per brood chamber (or 1 strip per 5 frames of bees).
Apivar was tested on the basis of a precise dosage and specific use directions, therefore these should be followed to obtain the best performance.
Under-dosage may lead to poor efficacy and be critical for the colony survival until the next varroa treatment.

An excessively low concentration may cause the parasites to become resistant to the active ingredient. That could be the case if only one strip was inserted, if old strips were re-used or if strips were not removed after the treatment period.

There is no contraindication to feed and treat at the same time. Apivar does not effect feeding. On the contrary, it can be easily thought that the two activities are synergistic to fight against Varroa mite:

In the apiary: Do not hesitate to treat with Apivar and feed honey bees at the same to time to prepare for the winter.

From a regulatory point of view, Apivar can be used all year round. Nevertheless, in accordance with good beekeeping practice, we recommend to treat when honey supers are not present. This would be the best way to convey a good image for honey as a natural product. As a consequence, strips should be removed before the main nectar-collecting period in the spring and can be placed into the hive after harvesting during summer.

It is recommended to treat when there is some brood in the colony and that is one of the major assets of a long-release treatment such as Apivar in treating against Varroa.
The strips release amitraz for many weeks. As a consequence, treatment is effective for several reproduction cycles of the Varroa mite and can be more effective for decontamination of the colony.
It is very important to position the strips in an area of high activity and nearest to the Varroa breeding area (in the brood).
Nevertheless, when there is no brood in the hive, treatment is also effective.

In the apiary: First of all, locate the brood area, then place 2 strips between the frames with a minimum distance of 2 frames between strips.

As Apivar is a medicine, you should read and follow the directions of use.

This is very rare.  Our recommendation will be to remove the propolis from the surface as it prevents bees from having real contact with the strips and lowers the diffusion of amitraz.

In the apiary: Scratch the strips with a hive tool when there is too much propolis. In this case, it can be appropriate to lengthen the treatment a few additional days.

Apivar packs are sealed under vacuum to ensure a good preservation of the strips and the best quality.  So, to guarantee a high concentration of amitraz, strips have to be used as soon as possible after opening.

In the apiary: It is recommended not to prepare strips the day before their installation into the hives.

After removal the strips should be disposed of in a registered local body landfill (i.e. local rubbish collection).

In the EU where it has been developed, Apivar is classed as a veterinary medicine and is subject to the medicine regulations. As a consequence, Apivar benefits from a full market authorization dossier with efficacy data that shows its efficacy to reduce Varroa mite infestation.

Since it has been authorized, many trials have been carried out on a regular basis to monitor its efficacy. For example, in France, where Apivar is authorized and used on a large scale since 1995, Veto-pharma takes part every year in an efficacy study. The efficacy of Apivar remains very high despite a very intensive and repeated use for many years in a lot of countries worldwide.
Trials have also been conducted in the US and Turkey in 2009, and in Bulgaria in 2011. All the results are consistent and show a constant efficacy.

The French laboratory of ANSES in Sofia Antipolis, is the reference lab for the European Union for honey bee health. It has conducted a residue trial in 2007 whose results are consistent to previous ones:

Other studies concluded that quantities of residues of amitraz or its main metabolites in honey are always under the MRL.
Ref: Martel A.C. et al, Acaricide residues in honey and wax after treatment of honey bee colonies with Apivar or Asuntol 50, Apidologie (2007), 38, 2002, 534-544

Apivar is authorized in several countries thanks to a complete Market Authorization Dossier that includes safety data.

Two types of toxicity have been assessed:

As a consequence, it can be said that amitraz is safe when it is used in accordance with recommendations (dosage, treatment duration…)

On the contrary pyrethroids (like fluvalinate) are more stable in wax. Some studies show that the level of residues of this product is higher for a longer time than those of amitraz’s. The risk of residues in honey is more likely with these type of actives.

Apivar is the result of a unique technology allowing the continuous liberation of a little dose of the amitraz for a long duration. To cover many varroa mite life cycles, it is important to leave the strips unmoved for several weeks. This long-acting treatment does not lead to an accumulation of residues. Amitraz is very sensitive to hydrolysis which means that it is very quickly destroyed after liberation. Many studies have shown that there is no more residue after 24h in wax and honey.
Amitraz is destroyed as the treatment goes along.

Nevertheless, it is important to remove the strips at the end of the treatment to avoid the continuous liberation of amitraz at very low dosage, too weak to be effective but probably high enough to select resistances. Forgetting the strips in the beehive for all of the wintering period could probably be responsible for the hypothetic emergence of resistance.

It has been recognised for many years that amitraz is very effective for the control of varroa mite infestation in the colonies. Nevertheless, efficacy and security for both humans and bees are only provided by a restricted use of the active ingredient.

The use of Taktic in the apiary is very far from Apivar guarantees. Taktic is a short acting product and as a consequence only kills phoretic varroa present at the moment of the application with no control of the residues and the quantity of actives inhaled by the beekeepers. New generations of bees will be contaminated as soon as they emerge from their cells. As a consequence, this illegal treatment presents very low effect when there is brood in the colony and is responsible for high risks to honey bees and human health.

On the other hand, Apivar is authorised as a drug which delivers a controlled and continuous amount of active during many varroa lifecycles allowing elimination of most of the varroa in the beehive. Moreover, the residues are known and always lower than the regulatory threshold (Maximum Residue Limit) defined for this active.
Apivar is not only effective but safe and helps beekeepers to increase the quality image of the honey.